The Pantheon is perhaps the most impressive building in Rome, which makes it one of the most visited. It has survived mostly intact for almost two thousand years with the largest and oldest unsupported concrete dome in the world. As you walk out of the narrow lanes into the small Piazza della Rotonda, the sheer size and magnificence of the ancient building hits you. It is a marvel of Roman engineering; scholars are still undecided what it was for or how the dome was erected. But still today visitors flock to see the enormous dome and be wowed by the hole in the centre that streams light into the building and lets rain in too. 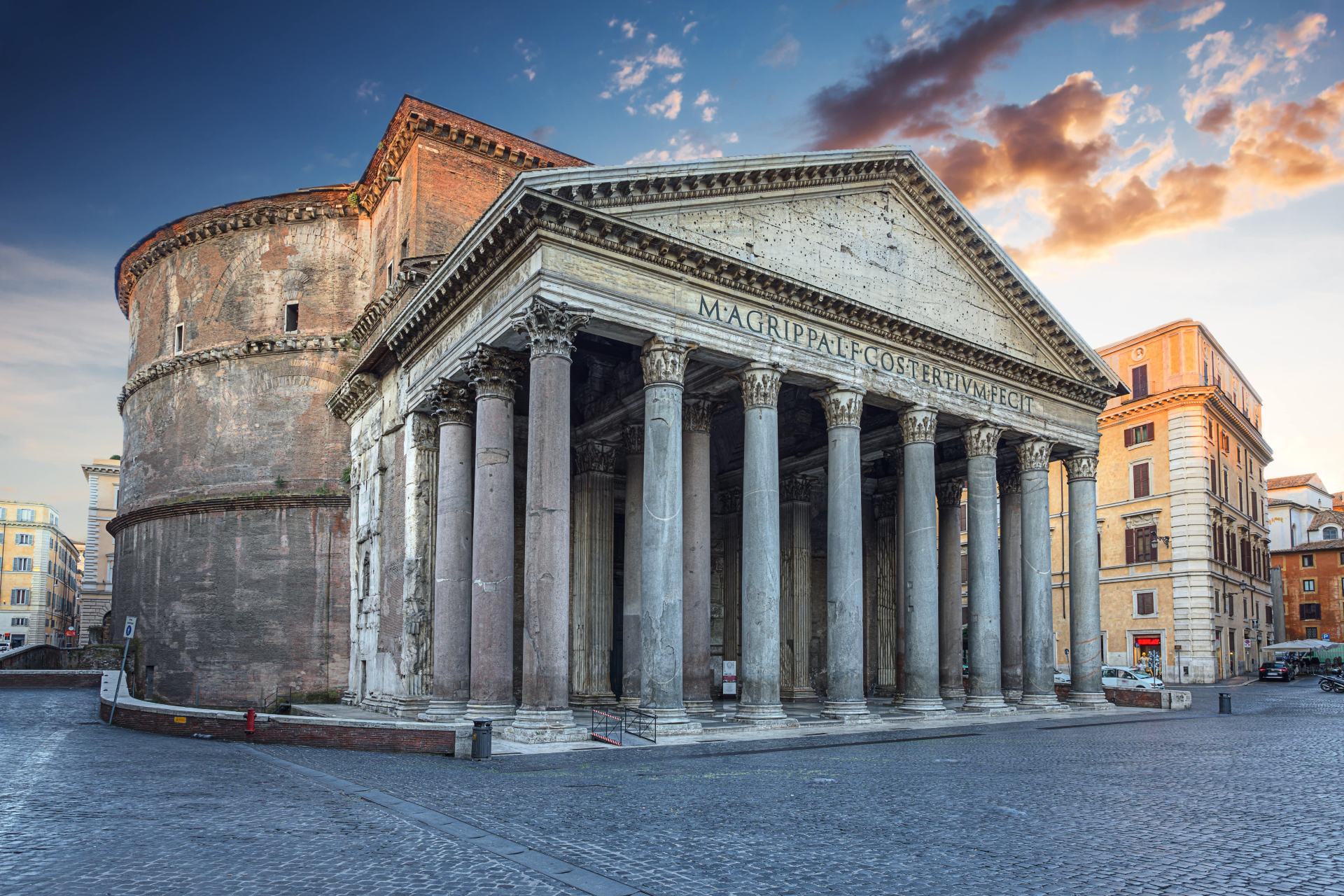 The Pantheon was built by Hadrian around 126CE. The inscription on the front tells us it was built by Marcus Agrippa, three times consul – but this is a lie, he built the first one which burned down. Hadrian’s Pantheon was unique in it’s round structure, many believe he may have designed it as he was an amateur architect. It has a Greek style round structure with a dome, with a Roman style porch supported by monolithic Egyptian Columns. Originally it was raised on a base with yellow marble steps that led up to it, but flooding over the centuries has raised the piazza to the level of the entrance. Pantheon means ‘All-the-Gods’ in Greek and many assume it was a temple to all the gods as the alcoves were once filled with statues of the most important deities.

The Pantheon is the most complete Roman building we have. How did it survive? It was converted into a church early on (gifted to the church by the last emperor Phocas in 609AD) and so remained relatively unscathed. Looters took the decorations and the bronze was removed by successive rulers including emperors and popes. Bronze tiles once covered the dome of the pantheon, decorated the triangular front and the inside of the porch. But the rest of the decoration including the marble floor is original. The building was renamed ‘St Mary and the Martyrs’ after cartloads of relics (bones) from the catacombs were deposited under the altar.

The building survives thanks to the protection of the church, but also because of its remarkable engineering. There is no other building quite like it in the Roman world. The enormous dome is entirely made of concrete and is 43.5m x 43.5m. Creating such a large dome presented a number of structural problems - the weight of the dome would surely collapse on itself. The supporting walls of the rotunda are over six feet thick to support the weight of the dome, which was also ingeniously thought out. The concrete is thick at the bottom and made of heavier material, as it rises it becomes thinner and is made of lighter material like pumice. At the centre, the most worrying point – a gigantic hole!

The only light source is the large hole or oculus in the centre of the ceiling which is 9 metres in diameter. Still today the oculus is open, it rains inside the Pantheon, but it was designed that way! The floor is slightly curved and has drainage holes to allow water drain away.

The granite columns holding up the porch are also an engineering and logistical marvel. The sixteen colossal shafts, 39 feet (11.8 m) tall, each weighing about 50-60 metric tons, were brought by ship from Egypt to Rome. Quarried in the desert and dragged to the Nile and then shipped to Ostia near Rome.

WHAT WAS THE PANTHEON FOR?

We do not know what the building was for or its original name. It seems that Pantheon was a nickname, relating to the statues that decorated the inside. It is unlikely that the building was a temple to all the gods, as there is no precedent for this in the Roman world. Today scholars believe it may have been an impressive audience hall where the emperor could receive important guests. The emperor would have been seated in a prominent place, bathed in light streaming from the oculus which may have caused a glitter ball effect bouncing off of the bronze rosettes originally set in the alcoves of the dome. 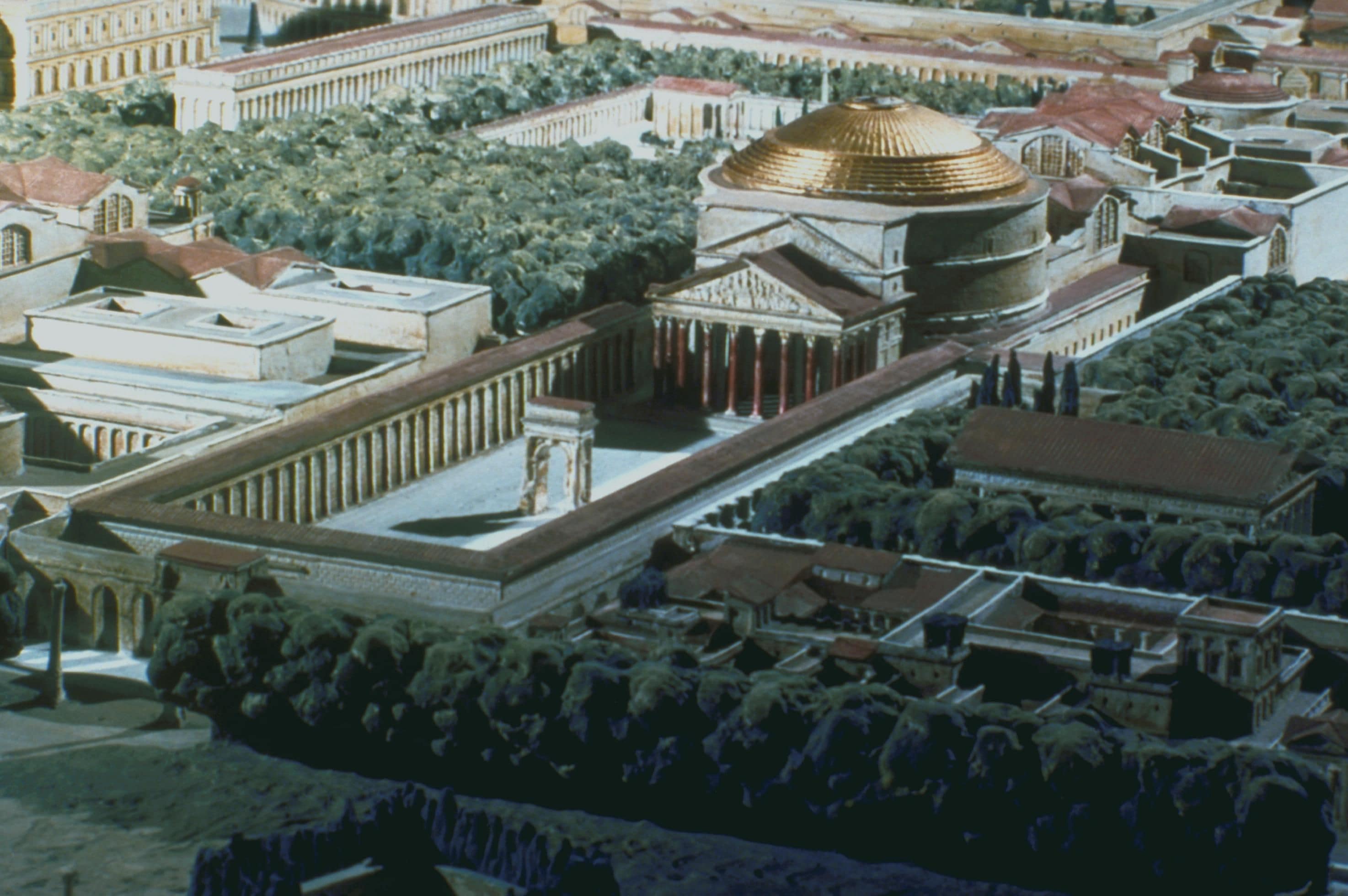 WHAT IS THE PANTHEON TODAY?

Today, the building is a popular tourist attraction, a functioning church (holding mass) and the final resting place of prominent individuals. On the right as you enter is the grave of Victor Emmanuelle II, the first kind of unified Italy. Opposite him on the left is the grave of the second king Umberto I, and his wife Margherita di Savoia the namesake of the famous pizza, apparently created for her in 1889. The Pantheon is also the burial place of the famous painter Raphael who is buried in a Roman sarcophagus to the left of the altar.

The pantheon is open every day until sunset and is absolutely free.At peak times, there may be a queue / line around the piazza, although it usually moves quickly. The best time to visit is late morning when the sun is streaming through the oculus.

Remember - the Pantheon is a church, knees and shoulders must be covered to enter!