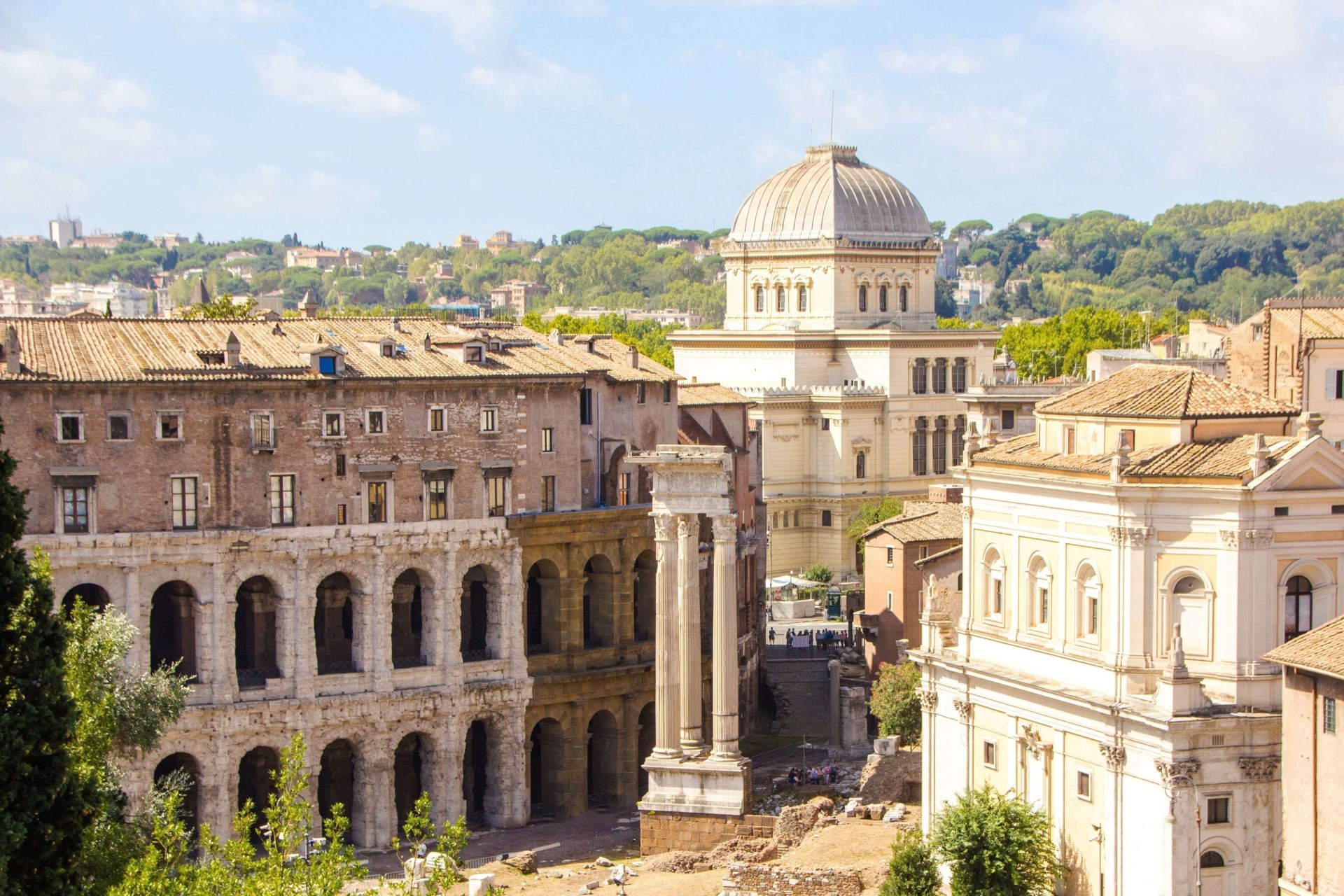 The Jewish Ghetto of Rome is a small area on the bend of the river Tiber.  Today it is a gentrified area nestled between ancient ruins and the river, marked by the majestic ‘Great Synagogue’ or Tempio Maggiore; which is unique for its square dome.  This elegant neighbourhood was once the most impoverished and unhealthy part of the city, known as ‘il ghetto’ where thousands of Roman Jews were crammed into a confined area for over 300 years. Today the area is popular with locals and visitors alike who come to sample traditional Roman Jewish dishes, many of which come from the ghetto years.

Rome’s Jewish community dates back over two thousand years to the second century BCE.  In Roman times the population was protected by law.  Since Julius Caesar they had religious and legal protection that continued well into the middle ages and was confirmed by the popes.  At the end of the 15th century Jewish communities were expelled from Spain, Sicily and the south of Italy under Isabella and Ferdinand of Spain, they came to Rome seeking refuge.  But after the glory days of the renaissance, the protestant reformation brought violence to the gates of Rome and everything changed.

Pope Paul IV was a ruthless counter-reformation pope determined to stamp out heresy and bring souls back to the catholic church by force if necessary.  He established the ghetto in 1555, subjecting the Jews of Rome to deprivations and humiliation they had ever known.

The Jewish community were forcibly evicted from their homes in Trastevere on the left bank of the river.  From now on the Jews could not own property. They were moved to tightly packed medieval housing in the most inhospitable area of the city that ran straight down to the riverbank and was prone to flooding.

Gates were built between the existing buildings which were closed at night, restricting movement and access to the rest of the city.  All Jews were required to wear a yellow scarf or hat for men and a yellow veil for women (the same as the city’s prostitutes).  Fraternisation with Christians was strictly forbidden and occupations were limited to unskilled jobs: second hand items, used cloth, pawnbrokers and fishmongers.  Once they were lawyers, doctors and bankers for princes and popes; but were now reduced to selling rags.  A Jewish tax was demanded from the community which paid for Christian festivals.

The religious freedom enjoyed by the Jews of Rome was forgotten, the popes of the reformation pressed for conversion. Not only did the Jews have to observe the Christian day of rest, they were forbidden to work on a Sunday.

On the Sabbath they were forced to attend Catholic mass at one of two churches outside the walls.  The church of San Gregorio della Divina Pietà, dwarfed by the synagogue today bears an inscription from Isiah (65.2) in Hebrew and Italian; “all day long I have held out my hands to an obstinate people, who walk in ways not good, pursuing their own imaginations.”  The catholic rulers used Hebrew scripture against the community!

Synagogue of the Ghetto

During the middle ages Rome had at least eleven synagogues, the Sephardic Jews that came to Rome built more.  Now there could be only one place of worship in the ghetto, which became known as ‘the Cinque Scole’, the five schools (of thought) or five synagogues.    These separate rooms in one building observed the different rites of the community.  Many had brought their manuscripts and religious artefacts with them and these were arranged in the various synagogues.

Everyone used the same entrance, but five different rites were celebrated inside.  The original Roman Jewish rites were the ‘Scola Tempio’, Italian Jews arriving after the expulsion used the ‘Scola Nova’ or the ‘Scola Siciliana’, Sephardic Jews from Catalan and Aragon were the ‘Scola Catalana’ and Castile the ‘Scola Castigliana’. The Cinque Scole was the focus of religious and daily life of the community, even after the end of the Ghetto.  Although the building was destroyed by fire in 1893, the piazza where it once stood has been renamed Piazza delle Cinque Scole.

Living conditions in the ghetto

The living conditions in the ghetto were appalling.  The residents could not extend properties out so, they constructed upwards which resulted in tall tenements with little daylight.  Large families lived in one room.  The overcrowding, poverty and lack of sanitation caused awful hygiene problems. Added to which, the ghetto area was the lowest in the city and regular floods caused yet more hardship and disease.

Clean water was also a problem, the nearest fountain was in Piazza Giudia (Piazza of the Jews) which was outside the boundaries.  The inhabitants of the ghetto had no access to fresh water after nightfall and resorted to using water from the river.

Rome was a very unhealthy place, the ghetto worse still.  In 1656 almost a quarter of the 4,000 people in the ghetto died of the plague.  The biggest killer in Rome was malaria.  Despite being by the river, the limited access to water meant there were no puddles, buckets and fountains for the Mosquitoes to breed; so, the ghetto was malaria free!

As time passed, some popes were more moderate than others and laws changed.     In the 19th century there were brief periods of respite when different foreign rulers took the city and reversed the laws, but these were short lived and the gates and the restrictions endured. By 1870 the unification of Italy was complete and the papal states and the pope’s rules were dissolved.  The gates were thrown open and the community could leave the ghetto, the gates were finally torn down in 1888.  The warren of dilapidated buildings was completely demolished in the following years and the new Synagogue was built in its place in 1904.

The confines of the old ghetto are difficult to appreciate today as the area has been completely remodelled with four large, new blocks of grand buildings that house apartments, offices, schools and restaurants.  Via Portico D’Ottavia, which is full of restaurants serving traditional Roman Jewish dishes, marks the perimeter of the old ghetto.  The ancient portico was the fish market until the early 1900s and was the main source of employment.  Over three hundred years of confinement in the ghetto strengthened the community who developed their own Roman Jewish dialect and traditional food.  Many of the fried dishes available in the restaurants reflect the ghetto years; limited cooking facilities meant food was prepared in bulk.  The ‘carciofo alla giudia’ - Jewish artichoke, fried salt cod ‘baccala’ and ‘fiori di zucca’ zucchini flowers filled with anchovies and mozzarella are an example and are served all over Rome, not only in the ghetto.