The Vatican is on the top of the list of things to do in Rome. By far the most popular attraction is Michelangelo’s famous fresco on the ceiling of the Sistine chapel. Today the chapel is part of the Vatican Museums filled with the priceless artworks collected by the popes. Pilgrims flock to Rome to see the home of the Catholic church and St Peter’s Basilica, built on the tomb of the apostle St Peter.

‘The Vatican’ has three main attractions for visitors: the Vatican Museums, the former papal palaces with one of the largest art and antiquities collections in the world, the Sistine Chapel frescoes by Michelangelo and St Peter’s Basilica – the largest church in the world.

Many people don’t know that Vatican City is completely separate from Italy, and has been since 1929. It is the smallest sovereign state in the world with an area of only 49 hectares (121 acres), completely surrounded by a wall. It also has the smallest population of just over 800 people. As an independent state, Vatican City has its own police force, currency, post office, registration plates, and there is even a papal train. The sovereign of this tiny state is of course the Pope, who is not only head of Vatican City, but the Bishop of Rome and head of the Catholic church. 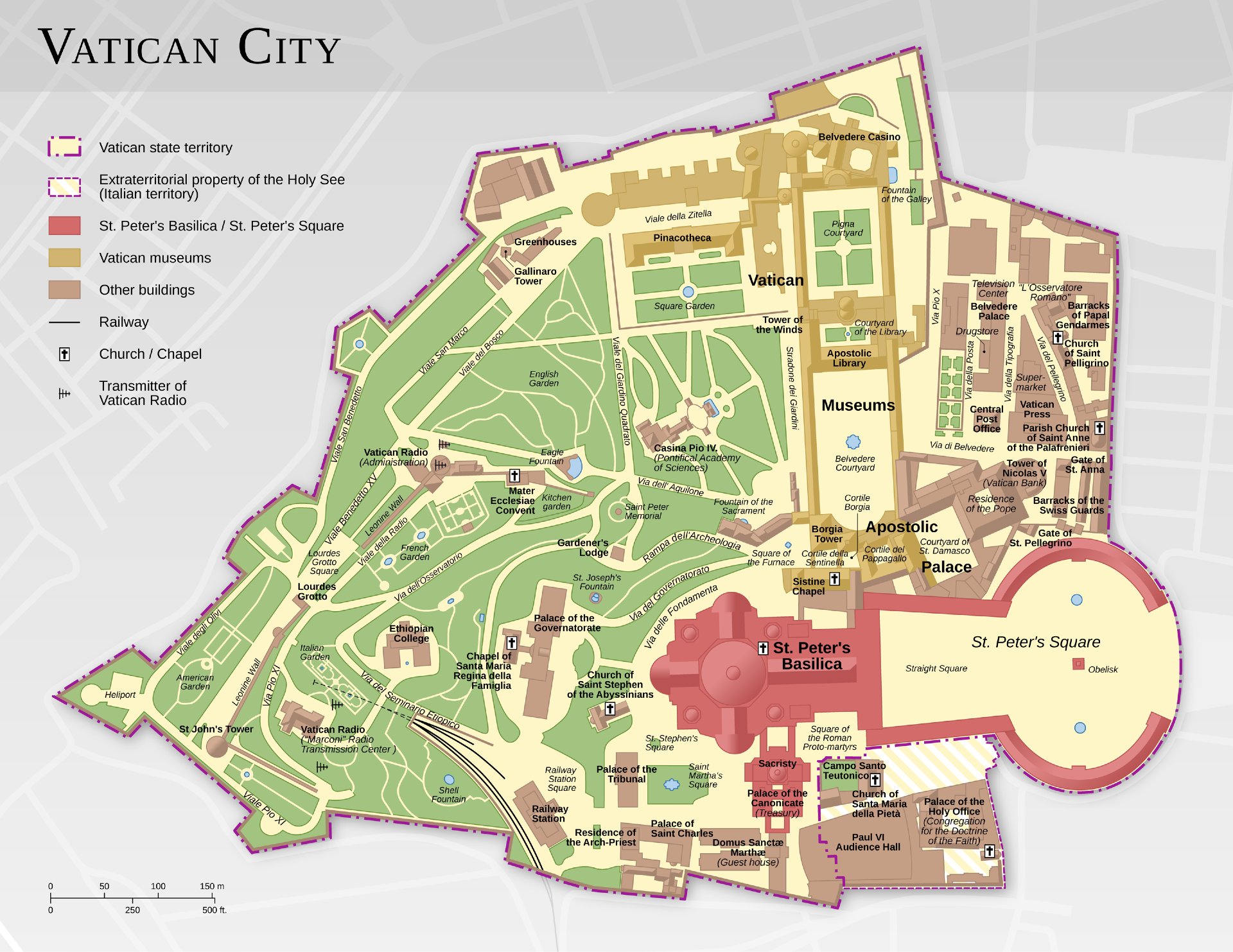 The third largest museum in the world is also the former residence of the popes since the 14th century! It is a huge, extended palace with 1400 rooms, filled with some of the world’s most treasured paintings, sculptures and frescoes. The contents of the museum represent the combined lifetime collections of the popes from the 16th century to the present stretching as far back as ancient Egypt, Greece and Mesopotamia.

With a staggering twenty two different galleries, the Vatican boasts one of the largest collection of Renaissance art, ancient statuary and artefacts in the world; the most famous are probably the Museo Pio-Clementino, with its splendid classical sculpture including the Laocoön and Belvedere Torso that inspired the great Michelangelo; the Raphael Rooms - entire rooms painted by Raphael including his ‘School of Athens’; the Pinacoteca (picture gallery) with medieval and renaissance paintings and of course the Sistine Chapel. 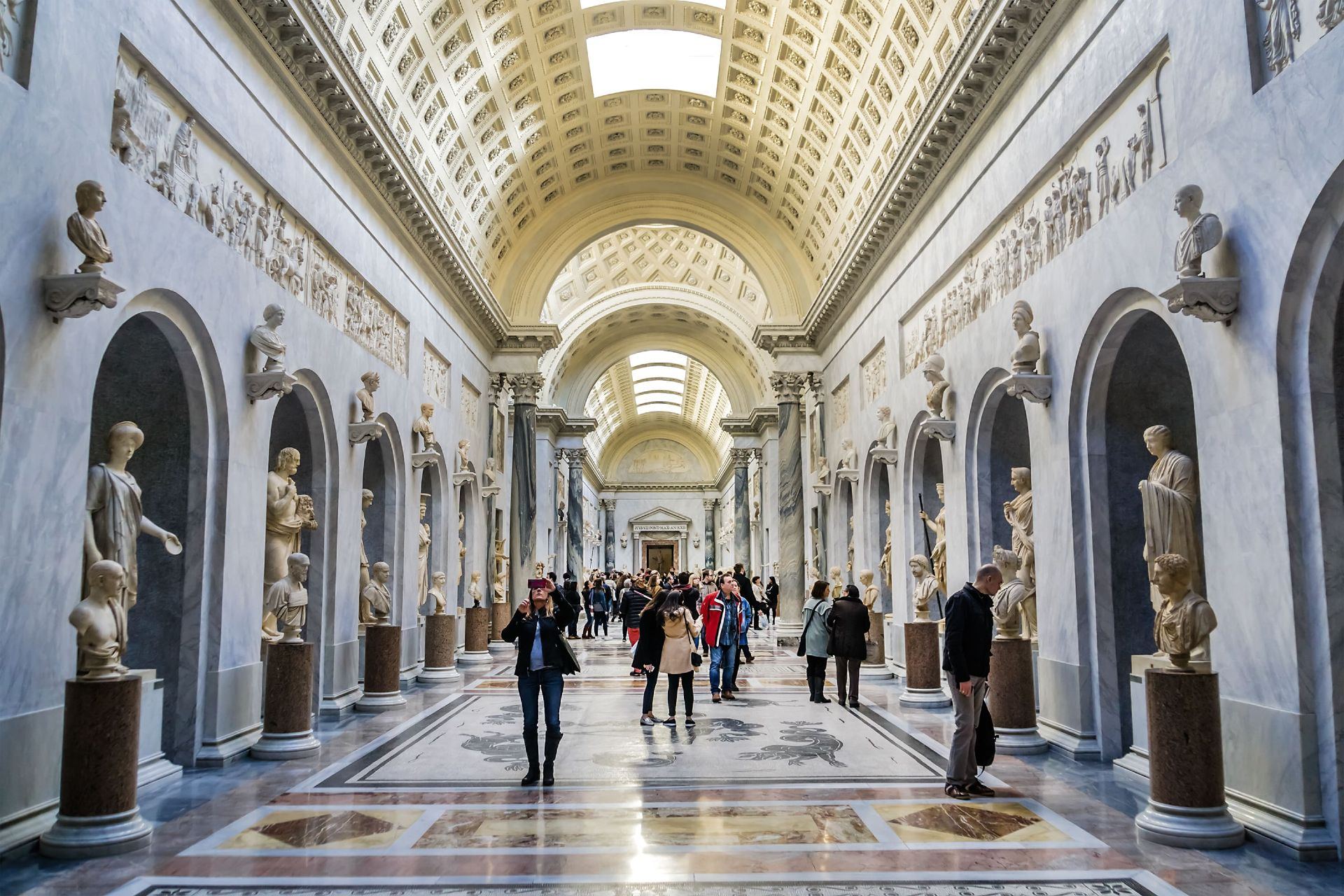 Once a completely separate chapel on the side of the hill, the Sistine Chapel is the pinnacle of a visit to the Vatican. This small, one-room chapel has become famous the world over for the genius of Michelangelo found in the idealised frescoes on the ceiling and the ominous Last Judgement on the back wall of the chapel. But it is more than just a decorated chapel, this is where the Conclave happens – the election for the new pope.

Running along the side of the walls are scenes from the life of Moses and the life of Christ - the work of the Renaissance heavyweights who came before Michelangelo like Botticelli, Ghirlandaio and Perugino Raphael’s teacher. The ceiling fresco which took Michelangelo 4 years to complete has stunning depictions from the book of Genesis. The nine panels tell the story of the creation; of the universe, of Adam and Eve, their fall from grace and their descendant Noah and the flood. Spanning the entire back wall is Michelangelo’s dramatic Last Judgment, painted over thirty years later. Its rich blue hue provides the backdrop for a swirling mass of characters' who are either saved or damned to hell. 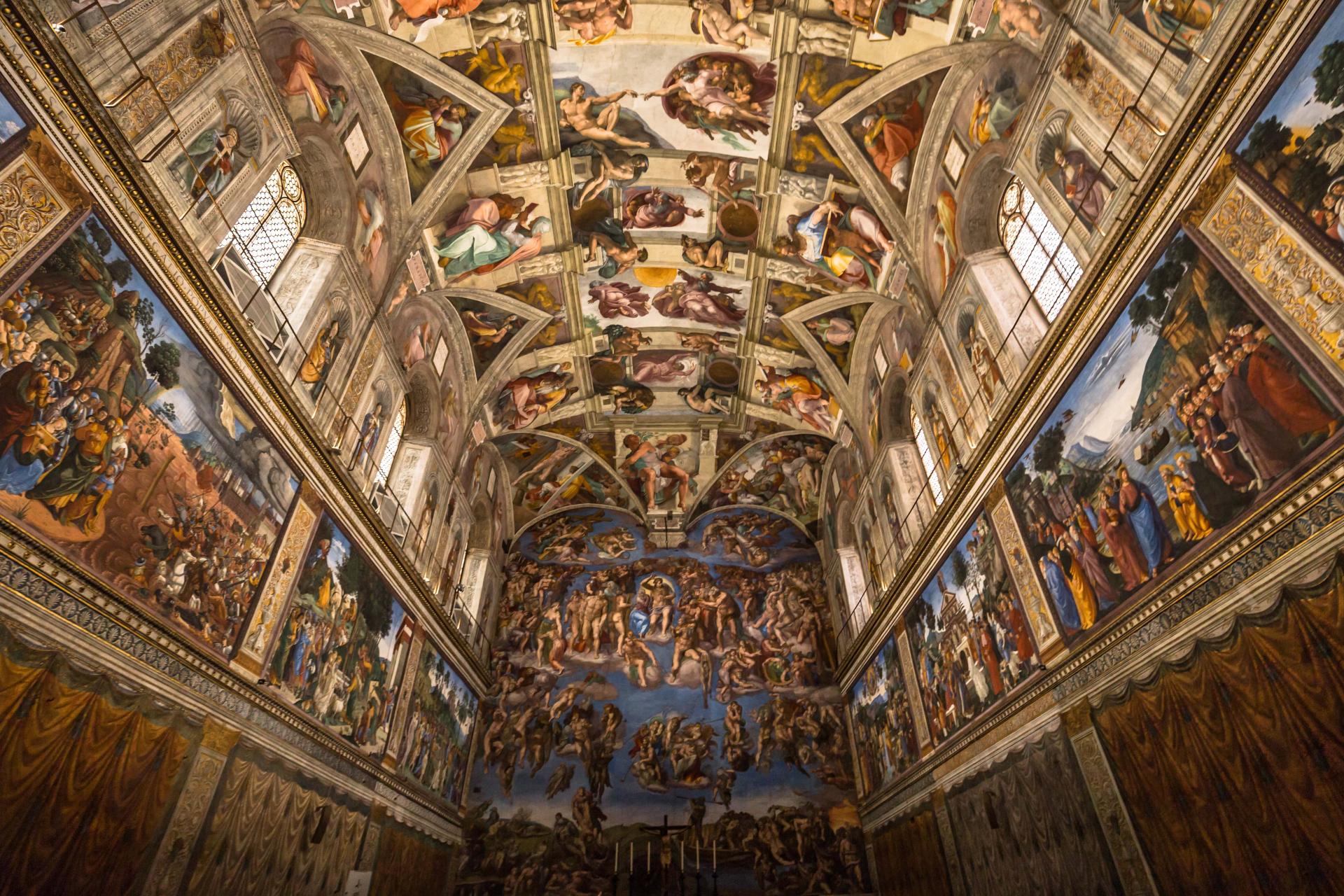 Saint Peter’s Basilica is one of the four papal Basilicas, built by the Roman emperor Constantine above the tomb of St Peter. The church standing today was built by Julius II ‘the warrior pope’, he wanted to build the largest church in Christendom. Started in 1506, his church would take over twenty popes, eight different architects and one hundred and twenty years to complete, but today it stands as the jewel of all catholic churches.

Inside the church are tombs of popes including the grave of Pope John Paul II, European dignitaries like Queen Christina of Sweden and Bonnie Prince Charlie, as well as some beautiful artwork. As soon as you enter, you are greeted by ‘La Pieta’ or ‘The Sorrow’, Michelangelo’s work, yet again. The virgin Mary sits, holding the lifeless body of her adult son. It is undoubtedly his most beautiful sculpture and the only one he ever signed. 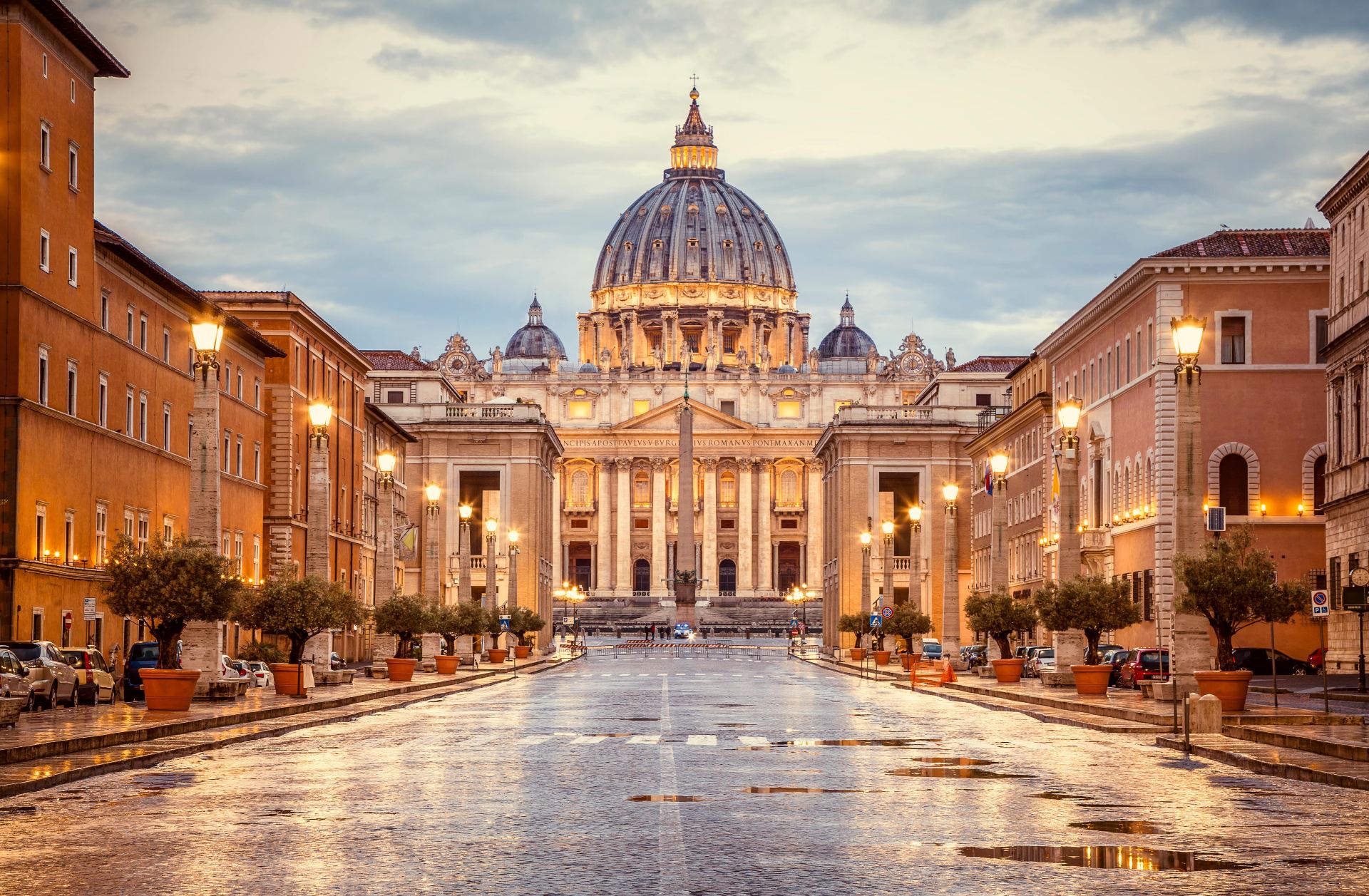 Bernini’s extravagant twisting bronze canopy or Baldacchino rises almost 100 feet above the papal altar. Its majestic proportions leave visitors awestruck, even more so when we realise the perfect symmetry –the Baldacchino, the dome and the cross on top of the church are all perfectly aligned with the tomb of St Peter beneath.

For those who still have energy, a climb to the top of the dome offers breath-taking views inside and out. Not for the faint hearted at 551 steps to the top (or 320 with the elevator), but the 360-degree panorama from the top is a once in a lifetime experience.

Tickets for the Vatican Museums and Sistine Chapel should be booked in advance as the museums can be crowded in high season. Guided tours offer the highlights of the museums and the Sistine Chapel and usually include privileged access and an explanation of St Peter’s Basilica. Entrance to Saint Peter’s Basilica is free, but separate tickets are required to visit the dome. 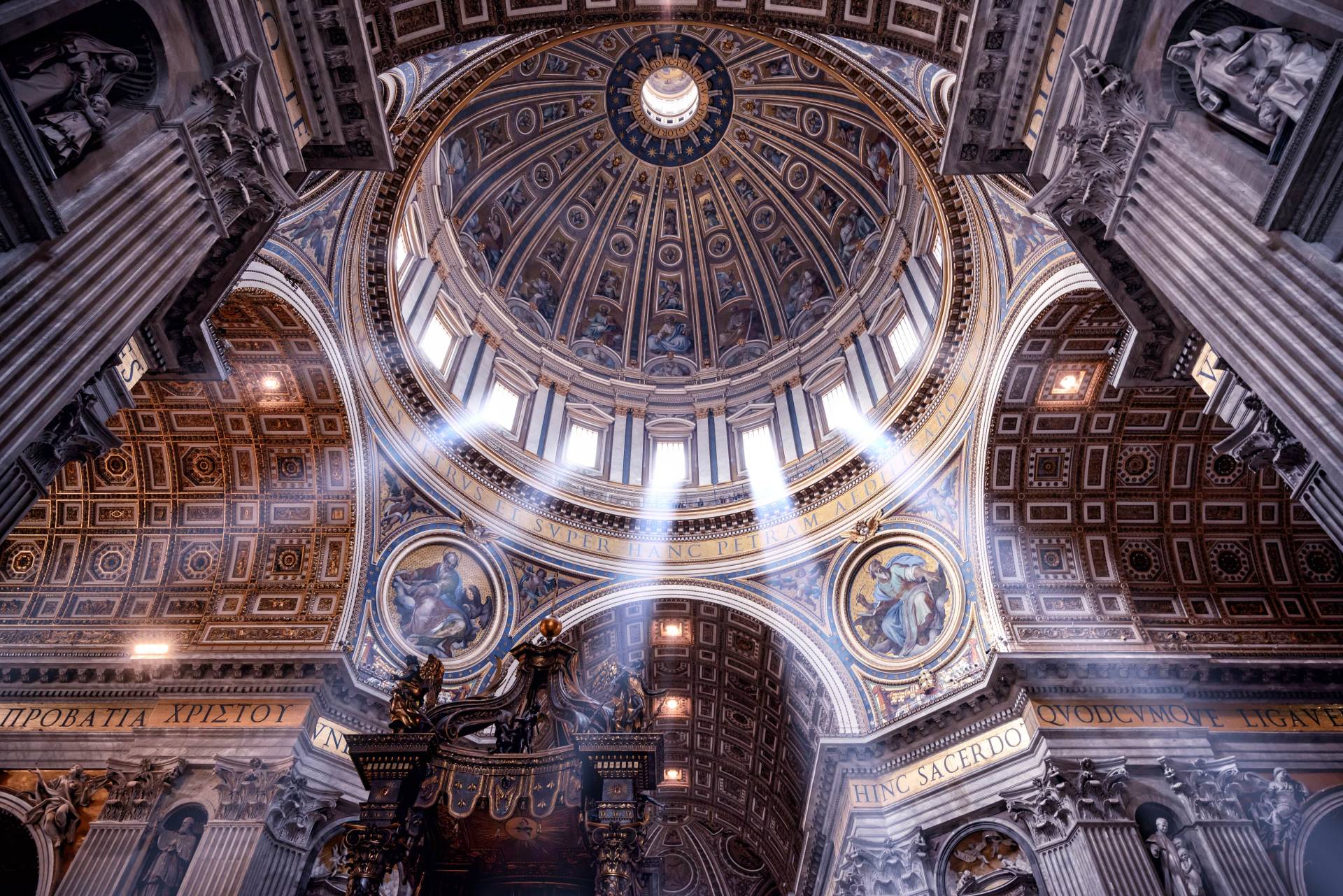